The 2015-16 English Premier League has just come to an end, but that doesn’t mean the fun stops. The 2016-17 EPL discussion is already underway, and many are trying to work out what players to watch, and which teams to watch out for. With both fashion and football mixing more than ever before, and players spending thousands to grab their designer items, this could be a year to remember for both their clothing choices, and their playing styles. Three players that had impressive 2015-16 campaigns both dress-wise, and footballing wise, are Anthony Martial, Harry Kane and Wilfried Zaha. The three attacking stars are very popular, extremely fashionable and very talented. After looking the part on and off the field this season could they be set for even bigger things in their football kits, and in their designer gear? 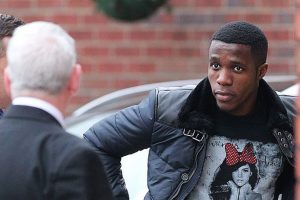 The three players had brilliant campaigns, meaning the media was all over their every footstep. With that in mind, they certainly ensured they looked the part.

Nadia, a personal shopped, has been ensuring superstars like Zaha, keep up their appearance off the field, travelling to shops across the country, and world, just to track down their favoured items.

She’s adamant that she’s often given around £20k to spend on a daily trip for stars. She backed Zaha’s style, saying, “He isn’t afraid to be himself and experiment. When I see him out I always admire his style.”

However, she admitted “The only grumble I get is that the players don’t like having the same items sourced as their team-mates. I have to respect that. I’ve had a bit of banter from players who refuse point blank to have the same trainers as the other lads.”

Zaha was recently reported as having his haircut every day, and adding that to Nadia’s comments, it’s clear he’s fashionable off the field. His form, however, has been growing on the field, with clamouring for him to become an England regular.

Kane and Martial, however, had excellent seasons, both earning extreme spotlight, giving them a chance to showcase their fashion skills as well as their footballing ones. The duo are that good that odds on who’ll win the 2016/17 Premier League season are pretty favourable for both Tottenham and Manchester United. Can they lead their team to the coveted trophy next season, and look the part while doing so?

Martial always looks smart-casual, like he’s ready to go on a date, see the lads, or turn up to a team meeting. He looks the part off the field, and his dazzling ability ensured he looked the part on the field last season. Big things are expected of the Frenchman this coming season, and with that, comes more money, and even more room to manoeuvre his wardrobe options.

Kane, has been in the EPL for a while, but lately his stardom shot through the roof, earning a new deal. The new deal has allowed for him to expand his fashion options. He has had two seasons of sensational form, and many believe with even more help, he can set even more records for Tottenham Hotspurs. If that happens, big-money endorsements will come, and he’ll soon be sending fashion agents across the world to upgrade his wardrobe to another level.

In the modern day and age, fashion is becoming as important as the football, and this trio won’t rest a day without improving upon either. Although Zaha is a level or two below Kane and Martial on the pitch, he is certainly the fashion leader at the moment, and perhaps he can compete on the field next season, too, with big things expected of him.

Kane and Martial, however, are icons on the field, and their fashion off the field has quickly caught up, allowing them to always look the part.

Could any trio of players have a better year in both fashion and football combined next season? We think not.