It’s one of the most accessible sports for kids around the world, but when it comes to professional football, things get considerably more complex. 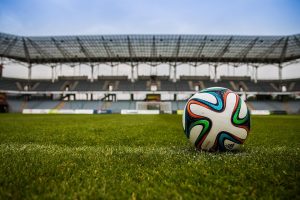 Sports involving a ball kicked along a field toward some kind of goal have been found in cultures worldwide dating back thousands of years, if not longer. In Britain, it evolved out of earlier games played by the Celtic-speaking peoples, and was therefore unpopular and, at times, banned entirely by several generations of English kings.

Initially looked down on as a violent and depraved peasant’s activity, it has risen to remarkable heights from its humble origins. The modern iteration of the sport was born in the 19th century, when formalised rules and clubs were born out of a number of London schools that banded together to form the Football Association (FA).

Out of sport comes entertainment and, inevitably, some form of wagering. As football’s popularity and profile rose, amateur teams gave way to professional and the business side of the game flourished. By the early 20th century, admittance was affordable for the general public and popularity soared, with attendance surging from the tens of thousands to the millions. Scouting of superior players (initially mainly from Scotland) increased as football became a moderately income-generating activity. Advertising sponsorships contributed to the sport becoming big business in the early part of the last century long before most other sports.

While initial international growth was limited to what now forms the UK and Ireland, the cultural influence of the British Empire spread the sport to trading partners, and British expats also took the sport with them to start clubs where they settled. Early clubs were formed across Europe and in South America, and football’s popularity eventually took hold in the US and other nations around the world. Radio broadcasts were superseded by televised broadcast, commentary and other supplementary programming that added another dimension and monetisation opportunity to the sport over the last several decades. Of course, in more recent times, technology has made so much more possible. All these televised events, be it sports or advertisements, can now be analyzed for demographic information as well. Advertising agencies can use tools from the likes of Samba TV or similar companies to understand who is watching what on their TVs, as well as on other devices. So, if a company wants to sell football merchandise, they can use identity resolution to direct their advertisements to the people who are into watching football. However, this kind of technology has shown up quite recently, and many agencies may not be aware of how they can make use of it.

Advertising sponsorship continues to be a major component of the professional aspect of the sport, and rising ticket prices and international popularity mean that significant funds flow into the sport, though there is some concern that the rising price tag and some struggles with racism in various regions are limiting the pool of potential fans. However, the figures going into (and coming out of) today’s football clubs are higher than ever, and the stars in the business bring in life-changing sums. Business moguls invest in sports clubs as more than a personal passion project – it’s now big business, and good management of a club can be a lucrative move.

As a truly international sport, top talent is scouted from around the world, and management and owners likewise hale from all sectors and locales. Nottingham Forest Football Club Limited is owned by a successful Greek shipping magnate, Evangelos Marinakis. Manchester United is owned by the American Glazer family.

Interestingly, the potential to generate income is not precisely linked to sporting prowess. The entertainment aspect of clubs has become a marketing exercise, with fans cultivated to invest in their home team and celebrity players who make various media appearances and star both on and off the field.

Managing a football club is a business opportunity that blends subject matter expertise in the sport with dealmaking and negotiation, a keen eye for cultivating talent, and marketing prowess. That said, not all owners take a hands-on approach to their clubs. Some provide the capital from a distance and rely on specialist staff to make decisions on the ground.

While some professionals in football management and business come from careers as former pro players, dedicated educational programmes offer specialist credentials in sports business, coaching, management, marketing, law, and other specialisations, including programmes specifically targeted toward future football business professionals. For the most devoted of fans, it is possible to study and obtain a master’s degree in international sports business and work with the stars of tomorrow.

However, on the business side of the equation, most owners are coming to football business management with experience as successful entrepreneurs, C-Suite leaders, and multinational moguls – so if an early career as a successful football professional isn’t in the cards for you, and business school with a sports focus doesn’t appeal, then you can always aim to become a billionaire and simply buy your way into the business.

You’ll want to pull together a solid war chest, though. Clubs aren’t going cheap these days. Experts predict that the historic international high point of the sport is still to come. You have just over a decade to pull together a cool 1bn or so to pick up a football club of your very own.