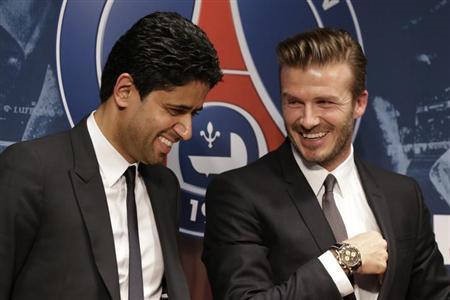 Professional footballers have it all: money, fame, and respect. Women throw themselves at the feet of these skilful stars regardless of how they look, but there is no doubt that the fashion conscious among the footballing elite are held in higher esteem among females. We’re talking about the guys that always end up on these Top 100 Hottest Sports Stars lists and suchlike. If you’re not sure about what style you should be aiming for in your life, then looking at what fashionable footballers have endorsed could provide some ideas.

Who better to endorse a watch brand than a playmaker who always manages to time the perfect pass? Ozil is the key creator in Arsenal’s attack and one of the reasons why the Gunners are 8/1 in the football betting to win the Premier League. But when’s he’s off the pitch he’s starring as a fashion icon for Cyrus Watches. The sleek timepieces were elected for Best Independent Watchmaker by Robb Report Singapore last year. With big names like Ozil on board the company looks set to feature more predominantly in the fashion world in the years to come.

When Ronaldo isn’t breaking records on the pitch with Real Madrid or surprising kids on the streets of the Spanish capital (see above), he is one of the most fashionable football players in the world. Among his numerous endorsements that earn him a staggering £25million-a-year on top of his Madrid wages is Tag Heuer, the huge Swiss watch company founded in 1860. Who better to wear one of the most luxury watch brands on the planet than one of the finest footballers in the world?

Ronaldo’s teammate at the Santiago Bernabeu is also somewhat of a fashion icon. Rodriquez was voted The World’s Sexiest Man in 2014 in Spanish publication People En Espanol, so it wouldn’t be a bad idea to try to emulate the attacking midfielder. The Colombian’s journey has been a true rags-to-riches story, which is captured in the advert for Hugo Boss perfume above. Ambitious men can wear the fragrance and realise that through hard work and determination, they too can achieve their dreams.

This wouldn’t be a list of fashionable footballers without a mention of the former Manchester United and England legend. Beckham is the pioneering football fashion icon and has earned more money since retiring from football than he did in his playing days. One of his many deals was with Emporio Armani, and he has frequently been snapped by the paparazzi looking the epitome of cool in the sleek and stylish suits.

So if you instantly want to up your style game then going with products that have been endorsed by these legendary footballers could be a good place to start. The suit, the accessory and the fragrance will all equate to a jaw-dropping look.