It’s Gotham City, but not as you’ve seen it before.

Bring the Bat-mania back with this legendary Gaslight storyline as the Dark Knight takes on Jack the Ripper and solves unexplained murders on the streets of the city. This amazing adventure-filled saga by Warner Bros. offers you a movie-date filled with action, suspense and the ominous voice of the Caped Crusader.

Stand a chance to win a DVD of Gotham by Gaslight. Simply tell us why Gotham by Gaslight is your favorite storyline from the Elseworlds series in 100 words and send it to us. Contest is open only to UK residents who have subscribed to our newsletter. Simply click on the button below, enter your name, email address and your message.

Winners will be announced next week. Keep your full postal address ready. You could be the one to get this DVD delivered right to your doorstep for being a loyal Bat-fan.

Undoubtedly one of the most gripping animated Batman films to date, Gotham by Gaslight is a new release from Warner Bros Studios. Brought out on DVD in February this year, it’s the thirtieth title in the acclaimed DC Universe Animated Original Movies series and is based on an early comic book in the ‘Elseworlds’ story. In case you didn’t know, this is a collection of comics which see familiar heroes placed in alternative worlds or time periods. 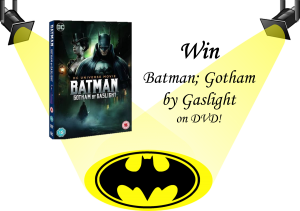 In this film, the famous crime-riddled streets of Gotham undergo an eerie Victorian makeover. With a spate on unexplained murders going down, and the police unable to put a stop to the crimes, it’s up to the Caped Crusader to track down the culprit and go head-to-head with one of the most elusive serial killers of all time, Jack the Ripper.

Cue a series of unmissable fight scenes, false accusations and hard-hitting action as the movie builds up to a thrilling encounter between classic hero and historic villain. It’s not for younger viewers (or the faint-hearted), but thanks to the directing talents of Sam Lie – not to mention a flawless vocal performance from Bruce Greenwood – this violent whodunnit is sure to leave you at the very edge of your seat.

And if the sound of this feature-length animation has got you ready to brave the streets of Gotham yourself, add some KAPOW to your day by playing the range of Batman slot games online. Take your pick from Batman and the Joker Jewels, Batman vs Superman: Dawn of Justice or Batman and the Riddler Riches.

Not sure where to play? Thanks to the range of games it allows you to try out in demo mode for free, powerspins.com is a free spins no deposit casino that boasts a rewarding sign-up offer for new players.