Home » Lifestyle » Want to try your luck in this awesome giveaway?

Ever since he started working with Jack Kirby at Marvel, Stan Lee has been a powerhouse of creative ideas that have survived the test of time and guaranteed him a movie career of appearing in cameos that should be good for the rest of his life. But in 2001, when he founded his own media production company, POW! Entertainment, Lee began to move into other ventures besides comics with a foray into the world of manga with Ultimo and Heroman as well as reality TV shows like Stan Lee’s Superhumans, the only thing he hasn’t had a go at is making an online bingo game. So far, his biggest production is almost certainly Lucky Man. Inspired by a fan question of what super power Stan Lee himself would like to have, he replied that he wanted the power to control luck. This in turn inspired Neil Biswas to start work on the script, running with Lee’s idea until he had the pilot! 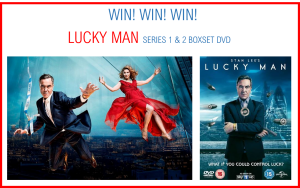 Starring James Nesbitt as DI Harry Clayton, a compulsive gambler with mounting debts, he takes one last stab at clearing his debts with a night at the casino, he meets the beguiling Eve (played by Sienna Guillory) and after a night spent together awakens with a mysterious bracelet on his arm. He soon finds out that the bracelet gives him supernatural luck and he soon begins to use it to help him make up for his gambling losses. It’s not until much later that he finds out that luck is an even-handed mistress and that for all the good luck he receives, bad luck happens to people around him. While Harry’s still deciding how to use the bracelet, he finds out a fearsome kingpin called Golding was originally supposed to receive it and that the crime-lord is now hot on his heels to find the luck granting artefact. Harry’s problems only worsen in season 2 when he meets a woman who has a matching bracelet that also grants incredible luck! Is she friend or foe? You’ll have to watch the show to find out.

If you don’t have it on DVD though, never fear, we have a giveaway we’re running right here where you can win both series 1 and 2 on DVD!

Send us a picture of your Stan Lee comic book collection and tell us who your favorite character is created by the legendary creator in 100 words.

Write your full name, email address, phone number and postal address in the entry clearly. Only one entry is allowed per person.

Don’t wait anymore. This is your chance to get inside the mind of your favorite comic book creator and understand the superpower that he loves the most.

If you win this contest and become the ‘Lucky Man’ don’t forget to share your experiences with us right here!