When vaporizers and e-cigarettes became prominent in 2008, they were mostly purchased for their functionality; but fast forward nearly a decade, and this basic recreational instrument is no longer just a dispense unit for nicotine and other compounds, it is also a glamorous fashion accessory. 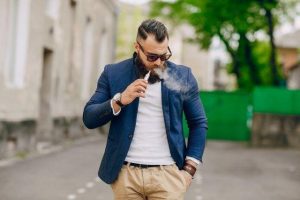 This shouldn’t cloud one’s mind from the reality of purchasing a vaping device though; because the first and most important attribute every vaping enthusiast should desire from their vaporizer is functionality. It must work properly with the refill contents to satisfy one’s craving.

“The growth in the vaping market has been incredible, with the continuous increase in the numbers of vapers attributed to the drastically less harmful characteristics of the trending lifestyle. The major consumer base of the slick looking equipments include new converts who have no history of ingesting recreational substances, and repentant smokers who are grateful to have finally found a way to defeat their previous unhealthy habit.” – Smart Vaporizer Company – Loto Labs

Vaporizers have, however, crossed the line of nicotine administering devices long ago, and have been incorporated as part of the accessories required by every man wishing to make a fashion statement. Whether it’s the e-cigarettes that are light and pseudo-cigarette in appearance, or the vaping pens with ends that can be clipped on the edges of fabulous suits, there are wide range of vape brands and types that are sure to meet consumers’ rich tastes. The mods, which are one of the largest of the vaping devices, are also fashionable with creative customization a definite possibility with the devices.

With vast types and designs of vaporizers featuring in different fashion shows as accessories for men and women, and also the utilization of luxurious and exotic vaping devices in multiple music videos that include several celebrity singers and rappers; it is not really difficult to understand the importance of acquiring a properly functional vaporizer that fits the fashion bill.

The proliferation of companies manufacturing different variants of vaporizers also provides testament that consumers aren’t looking for basic vaping devices, they want vaping tools that meet their standards and merge seamlessly with their style.

Loto Lux, a state of the art vaping device, is one of the best and trendiest vapes of 2017. Created by the innovative minds at Loto Lab, it utilizes a first of its kind heating mechanism that is referred to as magnetic induction. The pioneering technique generates concentrated magnetic waves that vaporize the contents evenly within seconds thus maximising flavour and potency. With the perfect blend of style and efficiency, the Loto Lux is certainly the vapourizer that makes the most fashion sense.