Iconic German auto-manufacturer Volkswagen needs no introduction, but the Group has teamed up with Gett, a taxi ride-hailing app to create MOIA, a standalone mobility services brand. 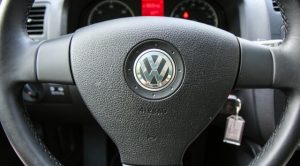 Inchape Volkswagen, VW cars dealership walks us through the details of just how Volkswagen Group’s 13th brand is geared to alter our approach to lift-sharing, electrification and autonomous cars.

The MOIA name was derived from the ancient Sanskrit word for “magic” and was introduced at the 2016 TechCrunch Disrupt London show by Volkswagen.

Following the news that the Volkswagen Group had invested $300 million into Gett, the brand was established a few months afterwards and it’s to be headquartered in Berlin.

Consequently, the partnership between the pair will go beyond just building cars, but will also aim to provide end-to-end services. The brand already harbours ambitions of becoming a market leader in emerging mobility services such as pooling shuttle services and ride sharing by 2025.

Ole Harms, the chief executive of the MOIA brand, commented: “MOIA is a standalone company under the Volkswagen Group umbrella, and will develop and market its own mobility services either independently or in partnership with cities and existing transport systems. In parallel, the Group brands will continue to move forward with their own services. Our sights are set on becoming one of the global top players for mobility services in the medium term. To achieve that, we will be seeking to attract the best minds and technology start-ups.”

The company is still a fledgling one, but the emerging mandate carried by those already working at MOIA has seen a few target dates set out, with all involved working towards the official launch of the company in 2017. The launch will see the introduction of pilot projects into two cities in Europe, with locations yet to be revealed. By late 2017 the first purpose-built electric vehicle will be revealed under the MOIA name.

2021 will see the company having an established mobility service, with 2026 earmarked for the brand to be operating as one of the top three mobility providers. The brand aims to be in ownership of a fleet of over a million app-summoned autonomous electric vehicles in operation to achieve this.

The Volkswagen Group is one of a few companies in the motoring industry which have recently begun taking the development of ride sharing services more seriously, while Daimler and BMW are two giants of the automotive industry which have both provided funding into start-up services and apps related to ride-sharing. Uber has benefitted from an investment and partnership with Japanese auto manufacturer, Toyota, while General Motors has also poured an investment of $500 million into Lyft.

Speaking on the significant uptake in interest, Volkswagen Chief Executive Matthais Muller remarked: “Though not everyone will still own a car in future, MOIA can help make everyone a customer of our company in some way or another.”